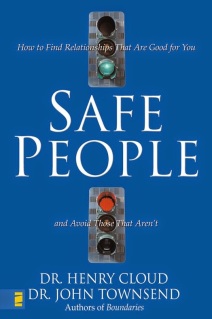 I am loving reading books by Dr. Cloud and Dr. Townsend.  Here are my notes from this book, Safe People.  It is a book worth buying. None of this my original thought- all from the book.

“Safe people are individuals who draw us closer to being the people God intended us to be.  Though not perfect, they are “good enough” in their own character that the net effect of their presence in our lives is positive.  They are accepting, honest, and present, and they help us bear good fruit in our lives.” pg.11


How to Be a Safe Person to someone else:


Should I Repair or Replace this Relationship?


You are not ready to replace a significant relationship if:


Safe People and the Church
What many Christians do not understand is that relating to each other is a spiritual activity.  Well “Christian” does not automatically mean “safe”.(my thoughts:actually that label actually means very unsafe to others and with good reason)
Safe is defined as helpful.  The church is not a totally safe place and it does not only consist of safe people. The walls of the church do not make it safe from sin.  In fact, the church by definition is composed of sinners.   The Bible says the church is full of wolves as well as sheep.  In the church we will find both tremendous healing and potentially tremendous hurt.
We need to be discerning because no family is perfect.  We have to avoid becoming pessimistic and learn to recognize the goodness that abounds within a family of God.
Advertisement